For the Love of Books 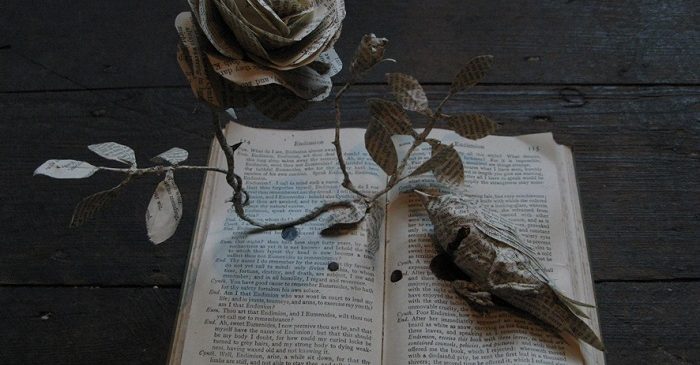 For the Love of Books, our 2012 exhibition, was the first time our focus was on the exploration into artists’ books. The image above is of Elizabeth Willow’s Minor Elizabethan Drama, Volume II.

Artists’ books, artist books or book art is a broad definition which has developed from an early idea of works illustrated by artists, through to book transformations where books themselves are deconstructed and reconstructed in new forms. Books by artists today provide a challenge to great works of the past, and are an increasingly popular way to explore the fusion between image and text, graphics and physical form.

We created an exhibition which reached far and wide for fascinating examples: book artists, visual artists, bookbinders and illustrators submitted works in a variety of formats, from bound volumes to sculptures and installations, demonstrating the power of the book to inspire and provoke an emotional response.

The exhibition was timed to coincide with the Bicentenary of Edward Lear’s birth on 12 May 2012. An enormous Public Art project was commissioned to create the Knowsley Alphabet trail at Knowsley Leisure & Culture Park to celebrate Lear’s Book of Nonsense, written for the Earl of Derby’s grandchildren at Knowsley Hall. We also collaborated with Knowsley Safari to deliver Lear-themed workshops for local schools.

Classic publications by Edward Lear, whose text and illustrations share equal importance in his works, sat alongside the new works by contemporary artists and a number of pieces kindly on loan from Manchester Metropolitan University’s Special Collections. We selected items as examples of other approaches to the alphabet in contrast to Lear’s Alphabet.