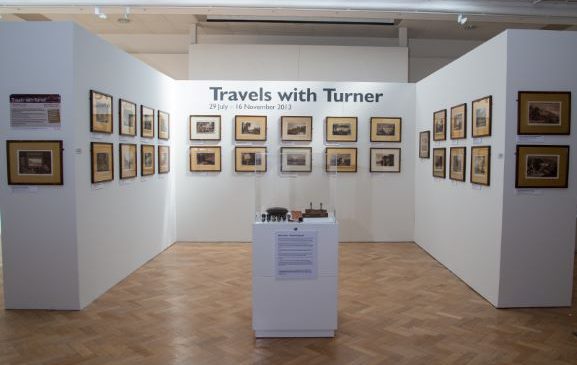 This exhibition from 2013 is special for a number of reasons; it was our first mini Knowsley tour, being exhibited first in Huyton Gallery and then at Kirkby Gallery, and it also enabled us to work with a number of local and regional artists, to profile their Turner-inspired work and practice, which was shown alongside Turner’s work.

The core of the exhibition was a selection of rarely-seen prints by JMW Turner, part of the Liber Studiorum series, on loan to Knowsley Council from Manchester Metropolitan University Special Collections.

Joseph Mallord William Turner is perhaps the best-loved English Romantic artist. He became known as ‘the painter of light’, because of his increasing interest in brilliant colours in his landscapes and seascapes. The exhibition gave a fascinating insight into the inspiration behind his imagery, his travels and his lesser known print-based work.

Also accompanying the exhibition was a series of landscape photographs taken in and around Knowsley by local photographer Ian Hewitt, echoing the visual markers and settings of famous paintings by Turner.

We asked Ian to share his thoughts about his practice and the work he created for the exhibition: “I wish to show the varied landscapes of the greater Merseyside and North West area. From agricultural and country settings to seascapes and urban architecture, the North West has some contrasting and diverse views, where for hundreds of years, have been worked by different industries, shaped by nature and sculpted by mans engineering spirit. I wish to show the land in its current state, whether it’s capturing the relics of neglected and long forgotten industry left to nature or impressive sea views.”

Specific to the Kirkby Gallery show, was an exhibition of work by English painter Pete Clarke and Cologne artist George Gartz, an Anglo-German collaborative practice.

Clarke and Gartz embarked on their own project ‘Turner’s Travels’, following in Turner’s footsteps along the Rivers Rhine and Mosel in 2007, Yorkshire 2008, Venice 2009 and the Isle of Wight in 2011, making paintings and drawings based on his iconic imagery.

This website uses cookies to improve your experience while you navigate through the website. Out of these, the cookies that are categorized as necessary are stored on your browser as they are essential for the working of basic functionalities of the website. We also use third-party cookies that help us analyze and understand how you use this website. These cookies will be stored in your browser only with your consent. You also have the option to opt-out of these cookies. But opting out of some of these cookies may affect your browsing experience.
Necessary Always Enabled

Any cookies that may not be particularly necessary for the website to function and is used specifically to collect user personal data via analytics, ads, other embedded contents are termed as non-necessary cookies. It is mandatory to procure user consent prior to running these cookies on your website.