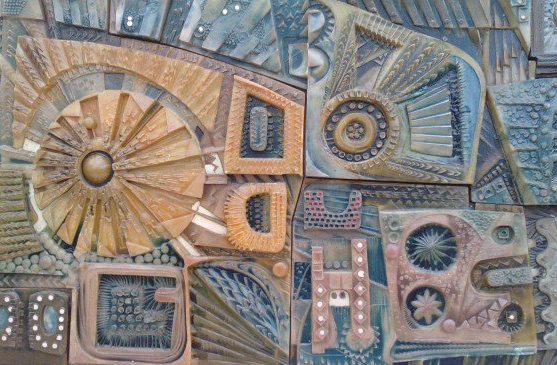 This very important piece of public art was created especially for the original Kirkby Library, inspired by Kirkby’s landscape viewed from above. Sculptor William George Mitchell was commissioned in 1964 to craft an enormous fibre-glass and cast resin panel. It is actually a series of pieces which fit together like a glorious jigsaw puzzle. The huge sculpture is a riot of texture, with sections in deep relief, and bursts of unexpected colour in amongst the earthy tones.

Following on from its installion in 1964, it was later dismantled and put into safe storage due to its immense size. It was carefully cleaned and redisplayed in the foyer of the old Kirkby Library & Gallery in 2011, and it now has a permanent home on the first floor of The Kirkby Centre, overlooking the new Kirkby Library, adjacent to Kirkby Gallery.

William George Mitchell was a designer, sculptor and artist who specialised in large abstract sculptures in wood, glass fibre, etched glass, plastics, stone, marble, and brick. Mitchell was also commissioned to produce high-profile works for Harrods, creating the famous, Grade II listed Egyptian Rooms. His other works feature in buildings across the UK including Clatterbridge Hospital, and many further afield in Qatar, France and America.

We were lucky enough to meet William in May 2019, when he visited to see his sculpture once again, before going on to Liverpool to view the building facades he designed, including Liverpool Metropolitan Cathedral and Federation House on Hope Street. He published a book about his life and many artistic achievements, “Self Portrait: The Eyes Within”, and kindly gave us a signed copy. Sadly, William died earlier this year on 30th January. The back cover of the book has the heading “A truly remarkable life of creativity and innovation” – it sums him up perfectly.